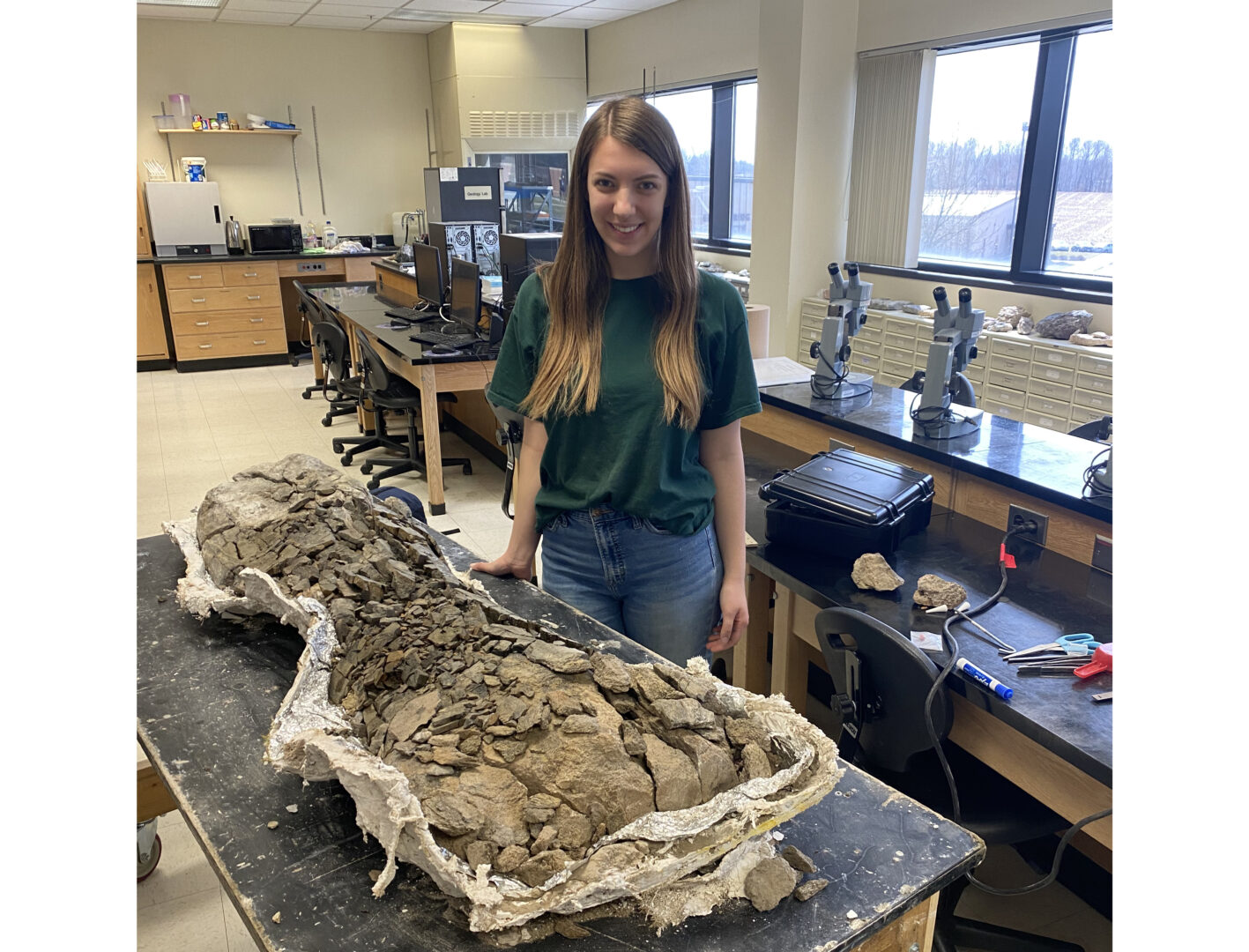 Cedarville University senior geology major Sara Mitchell presented her research from the study of a sauropod leg bone during the virtual symposium of the Ohio Space Grant Consortium (OSGC).

Mitchell, from Jacksonville, Florida, has been conducting her research since fall 2020. The leg bone, which is believed to be a femur from an adult diplodocid dinosaur, is on loan from a generous supporter of the university who owns a ranch in northwest Colorado where the bone was located roughly 20 years ago. 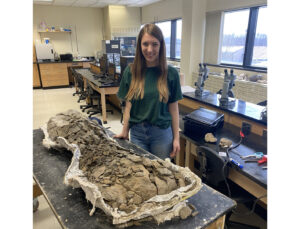 When Mitchell began work on the bone, it was being preserved in a plaster casing. She cut open the casing, known as a jacket, and began cleaning sand and other material from the bone. She took measurements of various aspects of the bone and searched related literature on the bone sizes of other dinosaurs.

She determined the bone is likely from a sauropod, a large, plant-eating dinosaur, and may be from the most famous of that type, the Diplodocus. The Diplodocus could range in height from 75 to 100-feet tall and weigh anywhere from 25,000 to 30,000 pounds.

Mitchell will share her findings during the virtual symposium on Friday, which will be attended by other student scholars who have received an academic grant from OSGC.

This is Mitchell’s second OSGC academic grant. During her junior year, she studied granite from Ireland and submitted her research for publication. Her conclusions about the sauropod leg bone will also be published by OSGC.

“I love how in all my geology classes at Cedarville, we are encouraged to learn and investigate, to appreciate the world around me and the God who made it all,” Mitchell said. “My classes were also very rigorous, and I feel confident applying for graduate school in the future. I’m excited, confident, equipped to take the next step because of Cedarville.”

Mitchell’s immediate next step will be a six-week capstone class offered through Indiana University at the Judson Mead Geologic Field Station just south of Cardwell, Montana, and not far from Yellowstone National Park. After that, she plans to write science textbooks for a year before applying to graduate school. Her end goal is a Ph.D. in geology and teaching at a university.

“God has really blessed Cedarville and the Cedarville department of geology by sending us exceptional students,” noted Dr. John Whitmore,  senior professor of geology. “We expect big things from Sara.”