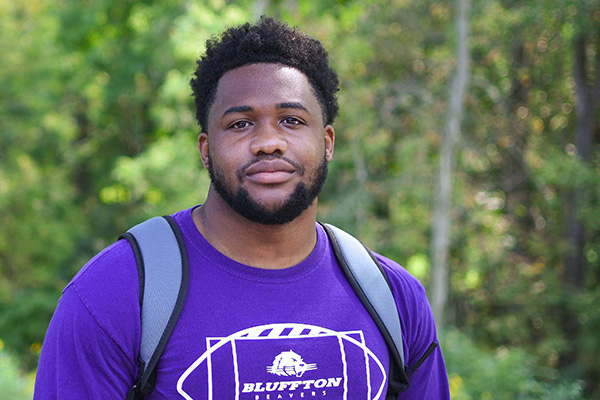 28 Sep Give Back: Bluffton Student’s Goal to Start Non-Profit

In his final year at Bluffton University, Darian Greeley’s goal is to give back. The senior criminal justice major from Detroit, Mich., was recently named president of Bluffton’s Multicultural Student Organization.

“I’m a big believer in giving back to the community,” said Greeley. “We have goals for the group to get out and do more community work. We’re a family, and I want everybody to see that before I leave.” 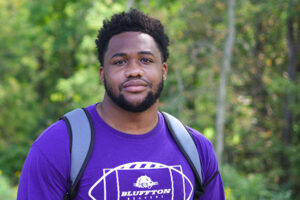 Greeley’s goal as the MSO leader is also in line with his long-term professional goals.

“My big goal is to one day have a non-profit organization as a way to give back to the people in my community,” explained Greeley.

Until then, Greeley is serving as a resident advisor in Hirschy Annex and is a 4-year member of the Bluffton football team. This fall, he’s gaining practical experience in his field by completing an internship with the Bluffton (Village) Police Department. Over the summer, he also interned with the Belleville (Mich.) Police Department, and he previously volunteered at the Allen County Juvenile Detention Center.

“My favorite experience was working with the kids,” said Greeley. “Working with juveniles, I felt like I could understand some of the struggles they’re going through.”

As a running back, Greeley has earned Heartland Collegiate Athletic Conference Offensive Player of the Week honors. Now, he’s excited for his senior season, no matter that the majority of the games are scheduled for the spring semester instead of the fall.

“We’re just taking it one step at a time like everyone else. I’m just happy we can play football,” said Greeley.

“When I first came here, Coach D seemed like a guy that cared about everybody.”

And while Greeley plays for Coach Aaron Krepps now, the team remains as close as ever.

“The best part is just being on the team and the connections you build with people, the bonds you form.”

Those bonds extend into the classroom as well. When asked if a specific professor has served as a mentor during his time at Bluffton, he explained that picking just one is tough.